The capital city of Vietnam, Hanoi, is famous for its incredible street food culture. Among other aspects such as crooked narrow streets and French colonial buildings, street food in Hanoi attracts millions of visitors every year. Tiny plastic stools, accompanied by tiny street vendors and restaurants, line streets across the city.

Taking your first steps into the chaotic streets of Hanoi can only be described as one thing. A true sensory overload.

And in the distance is the faint smell of something damn good cooking. As a result, it’s hard to know what it is about Hanoi culture you want to take in first. As you’ve just arrived from traveling, it’s likely to be food.

When arriving in a new country or city for the first time, it’s a challenge knowing what to eat. The easy option is to go to the nearest burger restaurant. And although the Vietnamese do western burgers very well, that’s not why you’ve traveled all this way!

Our street food guide for Hanoi has been designed to help you recognize popular dishes and how to order them effectively.

Our Guide to The Best Hanoi Street Food

Recognizing and ordering a dish in Vietnam can prove to be a real challenge. So much so, it can convince even the most outgoing eaters to head to the nearest western restaurant. Our guide will include the following to ensure you don’t do exactly that.

We will begin by highlighting our favorite Vietnamese street food dishes, available across Hanoi. Providing the correct Vietnamese spelling and what name to look out for. The majority of restaurants and street food vendors in Vietnam advertise their dishes on signs outside the shops. If you can recognize the dish on a sign, you won’t be going hungry!

Secondly, we will provide a breakdown of each dish’s ingredients and a brief overview of how the dish is created. Including all the bits that have the potential to turn your stomach. Finally, we will explore the best places to find these dishes and how much you should expect to pay. Eating in Vietnam should be cheap. And when it’s done locally, it is exactly that.

Below we have listed our top street food dishes from Vietnam that can be found in Hanoi.

Extremely popular in the north of Vietnam, Phở bò is a flavorsome street food dish that can be found everywhere in Hanoi. As a result, it is arguably Vietnam’s most famous and recognizable dish. Despite the fact that Phở bò is mostly eaten by the North Vietnamese, it can also be found in central and southern regions of the country. It is a healthy, warming and accessible dish for many.

Traditionally, the street food dish Pho Bo is eaten by the Vietnamese for breakfast. However, when wandering the streets of Hanoi, you will be able to spot locals eating a bowl of pho at any time of day. Written as phở bò by the Vietnamese, the dish is advertised signs outside restaurants and at the sides of the road.

Pho Bo is made up of a selection of different vegetables, pho noodles, and a meaty broth. At first, the broth is stewed over a lengthy period with bones to add a rich flavor. It is then added to flat pho noodles with a variety of spring onions and other vegetables. Finally, thinly sliced pink beef is added to the bowl. Chilies and garlic can be added at the end to suit personal taste.

Written as Phở gà, it is pronounced in the same way as a Pho Bo. Phở has an ‘f’ sound and gà a slower falling sound.

The dish itself is very similar to Pho Bo. Firstly, the broth is stewed with chicken bones over a lengthy period. The broth is then added to a bowl of soft Pho noodles. Finally, the street food dish is topped off with vegetables and chicken.

Popular across Vietnam, Bún Chả is as common as Pho Bo in both the north and the south of the country. Often the Vietnamese choose to barbecue their pork on the side of the road. As a result, it is regularly smelt cooking from a distance. And it really does smell delicious!

There are many restaurants and street-side vendors who are dedicated to selling the dish. Enjoyed by many, this street food dish is very accessible for many. Even the pickiest eaters can enjoy a bowl of Bún Chả.

Bún Chả is served in a similar way to Pho dishes. Vermicelli noodles are added to a sweet-tasting broth, often with sliced apples. Grilled minced or sliced pork is then added to the bowl. Finally, it is served with a side of fresh leaves, such as lettuce. These can be added by yourself to suit your own taste.

Different variations of this street food dish are served across Vietnam. In Hanoi, it is often served with minced, barbecued pork. Whereas, in the southern regions, it is served with fatty sliced pork. A standard bowl of Bún Chả from a street food vendor will set you back around 30,000-60,000VND ($1-4). When served in a restaurant, you can expect to pay more.

Bánh Xèo is mainly eaten in the southern regions of Vietnam. However, this delicious street food dish can also be found in the north. And mostly in Hanoi. The dish itself somewhat resembles a crepe, or an omelet and is traditionally eaten by the Vietnamese as part of a family meal.

More commonly found in restaurants, Bánh Xèo is a delicious, relatively healthy dish enjoyed by many. This interesting adaption of an omelet is eaten in various different ways, dependent on the region. In the north, it is usually served with rice paper, and in the south, it isn’t.

Bánh Xèo is created with eggs, prawns, pork, bean sprouts, and spring onions. Firstly, the whisked egg is added to a frying pan, topped with prawns, pork, onion and bean sprouts. Once the base has crisped, it is folded to create a somewhat egg sandwich. Finally, the dish is then served with a side of large lettuce leaves and a selection of green leaves.

In the north, the dish is usually served with scissors to slice and add to rice paper to create rolls. In the south, you’re expected to create the rolls yourself using provided lettuces leaves. The real challenge in the south is the lack of scissors. Slicing an omelet with chopsticks can be a real challenge. Worth it though!

Due to the fact it is served in a variety of sizes, the dish can vary considerably in price. Bánh Xèo costs between 25,000-80,000VND ($1-6) depending on what type of restaurant you’re lucky enough to enjoy one in.

Influenced by French Colonialism, Bánh mì is a light baguette stuffed with delicious fillings that cost next to nothing! Next to Pho Bo, Bánh mì is Hanoi’s favorite street food dish. Street food vendors sell this delicious treat on street corners and at the side of main roads across the city. It makes for the ideal breakfast, or just a simple lunch when you’re on the go.

Despite the fact this Vietnamese adaption of a sandwich is more common in Hanoi, it is also available in HCMC. And the rest of the country for that matter. If you’re looking for a quick bite to eat, this is the one! Simple western ingredients make Bánh mì an enjoyable treat for most!

Small vendors will advertise Bánh mì on the side of their stall. Easy to spot almost anywhere in Vietnam, this is not a dish to be missed. In fact, it’s pretty hard to miss.

The baguette traditionally used by the Vietnamese is somewhat lighter to the French baguette we are used to. Customers have a choice of egg, sausage, chili sauce, spring onions, pate amongst a variety of other fillings to choose from. Lastly, once the baguette has been filled, it is often heated in a hot pan or toasted before serving.

A bit more of a challenging find, Phở Xào is a not so common street food dish in Hanoi. However, it is one of our favourites! An adaption of a traditional Pho Bo, Phở Xào can be found in the most unassuming restaurants in Hanoi. Heavy with green vegetables, this dish serves as one of your 5 a day.

Despite it’s many similarities to a Pho Bo, Phở Xào is served without the broth and on a plate. It is more of a stir-fried dish than a noodle dish. At first, fat pho noodles are stir-fried to add a crisp texture. Following this, lean beef, onions, and fresh greens are stir-fried and added to the noodles to create a tasty dish.

As Phở Xào is less common than it’s fellow street food dishes in Hanoi, you can sometimes expect to pay a little more. Despite this, you will still pay a small amount of 35,000-60,000VND ($1-4) for a plate.

Phở Cuốn is a street food dish that remarkably resembles an Asian roast dinner! A Hanoi specialty, this delicious dish is very difficult to find outside of the city. There are a few dedicated restaurants in Hanoi that are worth seeking out when visiting the city. Phở Cuốn is a true western fix, served in an Asian way.

The area of Truc Bach on West Lake in Hanoi has a number of dedicated restaurants serving the best Phở Cuốn in the city!

Yet another adaption of a Pho Bo, Phở Cuốn is very much its own dish. Fat flat noodles are fried to create something that resembles a Yorkshire pudding. Following this, vegetables and beef are stir-fried with thick beef gravy and added to the noodles. Absolutely delicious!

Due to the fact Phở Cuốn is more of a specialty in Hanoi, the dish is slightly more expensive. Despite this, portions are huge! A plate of Phở Cuốn in Truc Bach will set you back around 50,000-70,000VND ($2-4).

Why Eat Street Food Whilst in Hanoi?

It’s no lie that Vietnam is famous for its delicious street food culture. If you haven’t sat on a tiny plastic stool eating a bowl of Pho, have you ever been to Hanoi? Locals and tourists make the most of the street food across the city all day, every day.

When on a budget, street food is also your best option. With dishes costing no more than $3, you really cannot go wrong. Western restaurants are located across the city, however, they can be very costly. Especially in comparison to street food.

Be adventurous. We promise Hanoi’s street food will not disappoint! 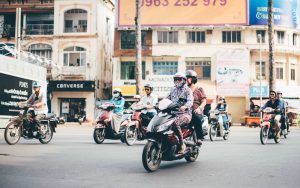