Air pollution in Vietnam has increased over the last decade. It is no lie that the main cities in Vietnam are polluted and that the situation is worsening. At present, air pollution across the country isn’t as high as certain areas and cities in China. However, on many days of the year, it isn’t far behind.

Millions of visitors arrive in Hanoi and Ho Chi Minh City every year. Many are unprepared for the ever-growing air pollution issue. Due to the increasingly high number of motorbikes and other vehicles on the road, air conditions in Vietnam are deteriorating. Quite literally visible in the air, pollution creates a cloud of smog in both cities regularly.

With air conditions worsening across Vietnam, the government is looking at a number of ways in which they can ensure pollution in major cities across Vietnam improves. In fact, Ho Chi Minh City is currently developing a metro system to connect the city, with an aim to open in 2021. Ho Chi Minh Metro intends to encourage locals to commute in an environmentally friendly manner. Whilst also adding ease to travel.

The government has proposed a motorcycle ban in both Hanoi’s and HCMC ‘s city centers by 2030. Introducing a restriction on two and three-wheeled vehicles on city center roads will minimize the amount of traffic during peak times. Thus decreasing air pollution across Vietnam.

The Vietnamese people are well aware of the increasing issue of air pollution across Vietnam, so never fear! There are a number of different ways to protect yourself from the effects. You can take additional protection to minimize the way in which you are affected.

Why Pollution Is an Issue

Vietnam has one of the fastest-growing economies in the world. After the Vietnam/American war, the country has been subject to rapid industrialization. And as a result, there has been significant growth in population, visitors and expats.

Due to the fact many businesses function from either city, the population in both Hanoi and Ho Chi Minh City has increased which means an increase in the number of bikes on the road. So as you can tell, all of this contributes to an increase in air pollution across Vietnam.

The main choice of transport across Vietnam is by motorbike. And despite the fact that entire families will cram onto one small bike, there is still the major issue that they can technically carry only two people. More than half of the motorbikes on the road are carrying only one person. As a result, there is a number of unnecessary motorbikes on the roads.

The ongoing effects of pollution across Vietnam are clear to any visitor. In most cities across the country, air pollution creates a cloud of smog that is visible in the air. As a result, it can often be smelt and tasted. Especially when riding on a motorbike or walking alongside a busy road. Scientific studies have proven that long term exposure to air pollution can have a significant effect on one’s health.

However, don’t let this put you off.

Protection is available in a number of different forms. We will discuss these later in the post to help you ensure you minimize the effects of air pollution on your own body. 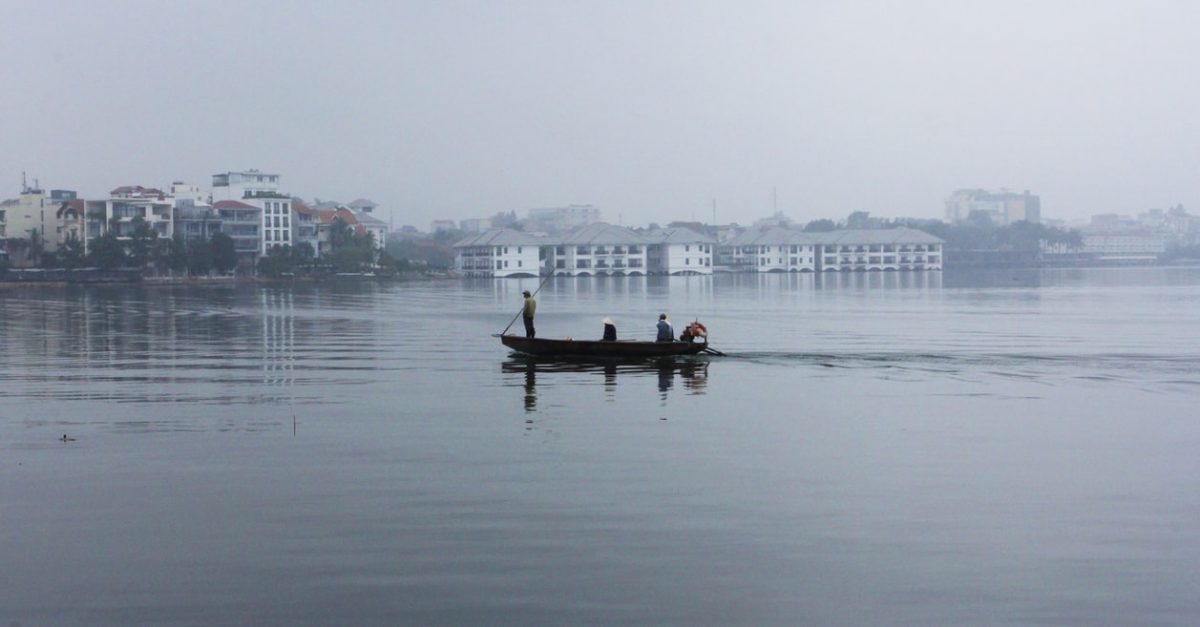 Both major cities in Vietnam are heavily affected by air pollution. As previously mentioned, economic growth has meant that the population in both cities has increased. And with a lack of public transport, particularly in Hanoi, many don’t have much choice. Traveling by motorbike is by far their easiest option.

Throughout the year, air pollution in Vietnam varies greatly. Often, it is heavily influenced by the weather. Windier days tend to move pollution out of the city, whereas hot, humid days tend to worsen it.

The real-time air quality index map shows an accurate air quality measurement for Vietnam. According to their results, pollution in both Ho Chi Minh and Hanoi ranges between 60-200 a day. Moderate to unhealthy. As a result, it is important for individuals to take precautions when needed.

Many locals living in either city take daily precautions to ensure that they are minimizing their own exposure to air pollution. Due to this, cheap pollution masks are readily available. However, we do not suggest relying on a cheap thin mask from a corner shop to protect yourself. Sadly, it has been proven that such masks do not provide effective protection.

At RentAbike, we suggest that all of our customers take care of themselves when riding one of our motorbikes. This means, not only wearing a helmet at all times to ensure that your head is protected. But also wearing an effective pollution mask to protect your health.

We have a number of items in the store dedicated to protecting you from the negative effects of riding a motorbike on Vietnamese roads.

Pollution Masks at Rent A Bike

At our stores in Hanoi, Da Nang and Ho Chi Minh City, we stock a range of pollution masks to meet your individual needs. It is hard to know which mask is best suited to you so we have highlighted all the masks we have in store and information on their cost and quality. Deciding which is best for you depends on the amount of time you intend on being on your motorbike, the nature of your travel and, your budget.

More posts on how to deal with pollution in Vietnam:

error: Content is protected !!
We use cookies to ensure that we give you the best experience on our website. If you continue to use our site we will assume that this is ok!OkPrivacy Policy