When you first arrive you may find it difficult to find petrol in Vietnam. There are many petrol stations around but sometimes you might not be sure as they are different from back home. Never fear! You can ask locals where they fill up. There is always one near your work, your house or along your travel route.

Another suggestion is to use Google Maps and type in the following search terms:

At The Petrol Station

Once you have found the petrol station, there could then be a problem communicating how much fuel you need. The table below outlines the amount as well as what it will sound like in Vietnamese. You simply need to pull up at a petrol pump and tell them how much you want. You can use your hands to indicate by showing 3 or 4 fingers if they are struggling to understand you. There is no big difference between 92 and 95 Octane fuel. The manufacturer will state which fuel is preferred but it isn’t greatly important to any of us.

Paying for Petrol in Vietnam

Typically, you won’t need much more than 100,000 for a full tank. In fact, 50,000VND will give you close to 3 litres and many bikes on the streets only have 4-litre tanks. If you want a “full tank” or “fill her up”, say ‘day binh’(day bing). Having a 100,000VND note on hand will speed up the transaction and cut down on the pressure you feel from those behind you who are in a rush to get to work.

The pronunciation of these words is attempted in (brackets). Some of the words, such as Bon, simply sound like you would read them in English other than they will have a tone on them. We are unable to put in the tones on this site, sorry. Others will have a sound that we have tried to attempt and give you a little clue also.

You will see everyone is fast and prepared.  We suggest lining up at the pump, opening the seat and the petrol cap, putting the petrol cap on the seat latch to stop the seat closing, putting my keys back the motorbike and following the cue. Once the bike has been filled and you have handed over your cash, put the fuel cap on and close the seat before getting any change. This routine helps the process for those waiting in line too.

When needing petrol in Vietnam, we prefer you to use petrol from the petrol station as it is of better quality, and better priced. It is illegal to sell petrol on the street and so vendors often put out a bottle with a colored liquid in it to advertise the fact that they have some petrol for sale but that it is tucked away hidden somewhere.  It is best to fill up at the gas station as this fuel could be cleaner as it can also be contaminated, i.e water or dirt.

We understand that in extreme cases it may be necessary to buy petrol in Vietnam on the roadside but it is best avoided. This petrol can be mixed with other liquids and cause damage to the bikes. It could have water and dirt in it which may cause the engine to have problems. 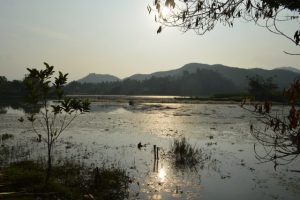